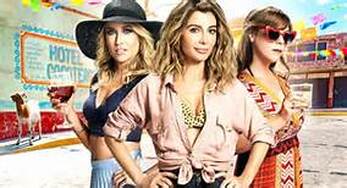 July 2020 on Netflix
“Desperados”, the newest addition by Netflix, is a slap-sticky, escapist, rom-com directed by LP (“Mr. Mom”) and written by Ellen Rapoport ("The Jamie Kennedy Experiment”). It stars SNL alumni Nasim Pedrad as Wesley, an unemployed school guidance counselor who drags her two best friends with her to Mexico in an attempt to rescue her new relationship with the boring and rigid but ultimately handsome Jared, played by Upload’s Robbie Amell. Why? Because after not hearing from him for five days, she impulsively sends him a very long, very drunkenly written email in a misguided attempt to get back at him for jilting her, only to of course discover that he wasn’t ghosting her after all but had actually been in a hospital in a coma. So of course, in grand chick flick fashion, she convinces her friends to go with her to Mexico where he is staying in a desperate attempt to delete the incriminating email.
If that plot sounds ridiculous and shallow that’s because it is. But no matter how unrealistic it is, there are still plenty of jewels and laughs to make it worth a watch. It’s top appeal for sure is the reuniting of Pedrad and her former New Girl co-star Lamorne Morris, who plays Sean, a failed former blind date that just happens to be in Mexico, at the same hotel, at the same exact time. Another one of the many elements in the film that prove how much of a fantasy this story is. However, the evolving partnership and crazy antics that happen between Wesley and Sean are the clear winners of the film. Although the scene with the dolphin is a close second for those who like the cruder, slap stick type of humor.
However, the most disappointing aspect, at least for me, was the one dimensional caricatures of the three female leads. For a script written and directed by women, I would have expected a bit more depth and empowerment from the ladies. But instead, all the women seemed to be so consumed with their relationships (or lack there of) with men (and at one moment a woman), rather than being secure in themselves and finding joy and worth on their own, with their own merits and virtues. There are more empowering female role models in Adam Sandler movies, which this is frequently stylistically reminiscent of. And if you miss movies like 50 First Dates then you will most likely appreciate this. But thankfully, no matter how crazy and unbelievable the antics of our female lead are, Ms. Pedrad is still a shining star and someone I would love to hang out with in the real world. And the chemistry between she and Lamorne is heartwarming and worth the 105 minutes in itself.
Is this one of best Netflix original movies out there? Absolutely not. But there’s enough wacky humor, a likable cast, and a beautiful ocean backdrop to keep you entertained and feeling all warm and fuzzy inside. And if you are just looking for something fun and light-hearted to watch on a Friday night, this is definitely worth a watch.